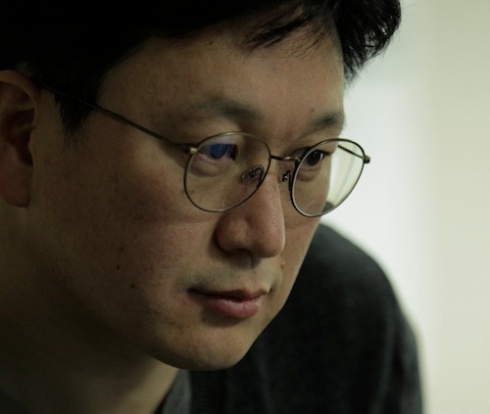 Director JEON is still relatively early on in his career, yet has produced an oeuvre of exceptional films starting with his town-trilogy (2009-2010) – Mozart Town (모차르트 타운: 2008), Animal Town (애니멀 타운: 2009), and Dance Town (댄스타운: 2010). His next film was the critically acclaimed From Seoul to Varanasi (바라나시: 2012) which was screened on the 27th September 2012 at Vue Cinema in Leicester Square, and was followed by a Q&A.

The group interview was well-attended and thought provoking, especially hearing about the difficulties that independent cinema still faces in terms of exhibition and distribution in South Korea which brought home how lucky those of us in London are to have access to such a wide range of South Korean cinema via the Korean Cultural Centre in London.

I asked Director JEON about his latest film The Weight, which had recently won the Queer Lion award at the Venice Film Festival, and whether it had been his intention to make a ‘queer’ film. His response was that he was more concerned with addressing issues of marginality thus continuing the themes of his other films, rather than a conscious intention to make a ‘queer’ film.  My interest in asking this question was a result of my research in South Korean ‘queer’ cinema for the Directory of World Cinema: South Korea that I was in the process of completing, through which I gathered that dealing with issues surrounding ‘queer’ identity was still considered relatively taboo in South Korea. So it was interesting that homosexuality and transgender issues were less significant in terms of the film that other issues of marginality including social class that were addressed. I did not have the chance to see The Weight when it screened as part of the London Korean Film Festival as I was at a conference in Cardiff that day, but I have heard and read very positive responses and hope to be able to see it fairly soon.

My second question was also a product of my recent research and indeed preparation for the group interview during which I read an article that talked about Director JEON’s films as working within a ‘traditional Korean aesthetic’. For those of us that study South Korean cinema, one of the topics that is addressed the most is what exactly South Korean cinema is – how we define it? and what are its particular characteristics that set it apart from other cinemas? In these terms the concept of a ‘traditional Korean aesthetic’ seemed to come in handy, but I felt perhaps hard to see in the films of a Director who is concerned with contemporary social issues. This was confirmed when Director JEON said that he did not know what it meant either, in general, or how it pertained to his films. Instead, he suggested that it is up to the audience to complete the film, rather than a film to complete the meaning for its audience – a view, that I as a film scholar and sometime Deleuzian, have always ascribed to. All in all, I found the group interview really interesting and extremely useful in terms of what I am working on at the moment.

The full transcription of the group interview can be found, as always, at Hangul Celluloid:

I would recommend Director JEON’s films to anyone interested in South Korean Cinema. I only managed to see Dance Town due to work commitments and unfortunately was not well the night of the screening of Seoul to Varanasi.

Dance Town,the last in the town-trilogy,  focuses on the plight of North Korean defectors to South Korea. The narrative is focalized through the point-of-view of  Jung-rim (Ra Mi-ran) whose husband is arrested by the North Korean authorities when a neighbor reports him for bringing in banned South Korean goods, including cosmetics and DVDs, to North Korea. She attempts to make a life for herself while waiting for news of her husband, but finds herself doubly displaced, away from home while at the same time lacking any sort of belonging in her new ‘adopted’ home. As a result, she is forced onto the margins along with society’s underclasses whose lives intersect with hers including a disabled man, Lee Joon-Hyuk, whose wife has abandoned him as a result of his disability;  Ji-na (Noh Seul-gi), a young schoolgirl who is dealing with an unwanted pregnancy, Kim Song-heui (Ju Yu-rang), her ‘minder’ whose job it is to integrate Jung-rim within the community;  and a  South Korean police officer, Oh (Oh Sung-Tae), who takes a shine to the lonely Jung-rim, but whose attentions are unwanted. Dance Town also boasts a small role for Darcy Parquet, whose work on South Korean cinema has been a pivotal in the growing appreciation of South Korean cinema in the West, as an American missionary who works in the community in which Jung-rim has been placed.

The overall impression of the film is one of bleakness and sadness, which culminates in tragedy: Jung-rim is raped by Oh after a night of heavy drinking only to subsequently discover that her husband, her soul mate, has been executed by the North Korean authorities. The feeling of loneliness, of isolation and alienation is communicated through the use of a realistic aesthetic, which is only punctured when Jung-rim fantasizes about being with her husband again, suggesting that fantasy is the only mechanism through which to deal with the social isolation experienced by the society’s underclasses. As such, Dance Town as Director JEON’s other films, contains an explicit critique of contemporary South Korean society, whose capitalist surfaces hide beneath them the suffering and brutality experienced by those who are positioned as societal outsiders through no fault of their own whether it is a result of birth, disability or gendered expectations. I found Dance Town a profound mediation on the cruelty of contemporary capitalism, whether in South Korea or elsewhere, and its creation of marginal communities. In short, Dance Town is a profoundly moving mediation on postmodern identity formation and fragmentation, that while it is specific to its place of production, has a message that rings true elsewhere including here in the UK where we learn to ignore the homeless while navigating our way around the city and where people in power would rather the rich had more money than provide for those less fortunate – which as Dance Town suggests, could be any of us, any day, any time…..