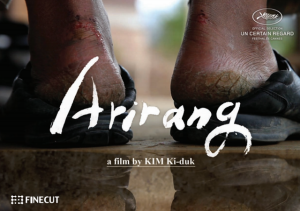 For me the most exciting news about this year’s festival is that Kim Ki-duk will be present for a director’s Q&A following the closing film, the award winning and intensely personal Arirang in which the director mediates on the nature of the creative process, and confronts his own personal demons. Arirang is a Korean folk song – according to some sources Korea’s unofficial national anthem – which has a number of regional and historical variations, while ostensibly a love song, Arirang’s theme of parting and sorrow provides a potent metaphor for Korea’s suffering as a nation and its enforced division at the end of the Korean War.

Kim Ki-duk is a prolific director, and while noted for what some see as the excessive [sexual] violence of his early films, Crocodile (악어, 1996), The Isle (섬, 2000)/Bad Guy(나쁜 남자, 2001), his films possess an artistry and authenticity that are the hallmarks of a true auteur. Director Kim’s 2006 mediation on the shifting nature of identity in a globalized world and ephemeral quality of love, Time ( 시간) is my favorite Kim Ki-duk film to date.

I was lucky enough to attend the preview screening of War of the Arrows (aka Arrow: The Ultimate Weapon [최종병기 활], KIM Han-Min, 2011), at the May Fair Hotel Screening Room on Friday, 16th September 2011. 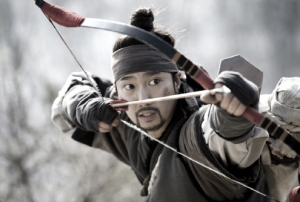 The opening film on 3rd September 2011 is War of the Arrows, the third feature film, from KIM Han-Min, which has just smashed through the 6 million admissions barrier in South Korea. A historical drama, (사극 – sageuk), set in 1636 during the second Manchurian invasion of South Korea, War of the Arrows is an interesting film and certainly a change to the more traditional action-oriented films which are associated with South Korea in the West.  I suspect that it will play to a packed house on the opening night of the London Korean Film Festival, and so it should.

First up is The Frontline ( 고지전,  PARK Sang-yeon: 2011), a murder mystery which is set towards the end of the Korean War – during the ceasefire between North and South leading up to the geographical and psychic division of Korea along the DMZ –  and managed an impressive 800,000 admissions in its opening week at the domestic box-office. Starring one of my favourite Korean actors,  SHIN Ha-kyun, who also had a starring role in PARK Chan-wook’s similarly themed Joint Security Area (공동경비구역, 2000) as well as the wonderful Welcome to Dongmakgol (웰컴 투 동막골, PARK Kwang-hyun, 2005), The FrontLine is part of the North & South Programme focusing on films made about the Korean  War.

Another film I am looking forward is Suicide Forecast (aka Suspicious Customers,수상한 고객들, JO Jin-mo, 2011), which is a comedy about an Insurance  Agent, Byung-Woo (RYOO Seung-bum) who takes it upon himself to try and talk some of his ex-clients from committing suicide. This seems like a nice counterpoint to my usual viewing habits in which a film about suicide would involve few laughs and a great deal of blood and gore. Detective K: Secret of the Virtuous Widow (조선명탐정 : 각시투구꽃의 비밀, KIM Sok-yun: 2011), a period mystery/comedy  is another film to look out for in the Comedy Film Section of the Festival. 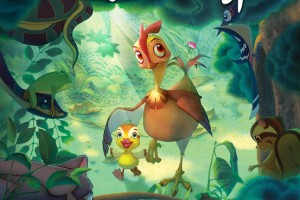 Perhaps surprisingly the film that I am most looking forward to is the animation, Leafie: A Hen Into the Wild (마당을 나온 암탉, OH Seong-yoon, 2011), a film about a chicken who desires to hatch her egg into the wild rather than in the pen in which she is kept. Based upon the best-selling children’s book by Hwang Sun-mi, this has been garnering excellent reviews and while South Korea is not recognized for its animation in the way that Japan is, it is representative of a vital and growing area of South Korean cinema. According to Jaeyeon Woo, the first animated South Korea film was Hong Kil-dong (홍길동전 in 1967 (The Wall Street Journal, August 12, 2011). Leafie: A Hen Into The Wild, will be just one of the films in the Children’s Films and Animation Section which will bring this little recognized area of South Korean cinema into the spotlight.

Action films will also be represented. Of particular note is the ‘Ryoo Seung-wan Retrospective’, which will include a showing of The Unjust: City of Violence(부당거래 2010) among others.

In addition is a ‘Mise-en-Scene shorts’ section which will include PARK Chan-wook’s and PARK Chan-kyong’s 10 minute short, Night Fishing, shot on the iPhone 4 which won the Golden Bear Award at the 61st Berlin Film Festival. Darcy Parquet talks about the film in some detail for Screen Daily, http://www.screendaily.com/reviews/latest-reviews/night-fishing/5023095.article. 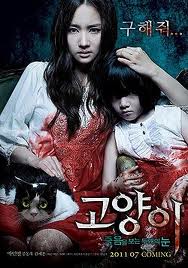 The full programme has still to be released, so that I am not sure what horror films will be showing at the Festival. I am, however, pretty sure that The Cat  (고양이 : 죽음을 보는 두 개의 눈, BYUN Seung-wook, 2011) will NOT be showing. This is a shame as I have been hearing good things about it, and it is top of my films to see list (which is rather long I have to admit). I will however update this blog once I know what horror films will be showing. Here however is a clip from The Cat, which is available from yesasia.com for pre-order (http://bit.ly/nFy66p)